It’s gonna be official sooner or later surely? I wrote an article that gained quite a lot of interest a year or so ago about the introduction of the USB C connection and how I was pretty sure it was not going to be a success.

Now in 2019 we really are still no further forward with the adoption of this as a perfect solution to connect your headphones. The reason is, it simply isn’t universal at all and adoption from headphone and earphone brands has been minimal to say the least. I admit it was a lovely idea to introduce a globally recognised connection on a mobile phone for charging and data but for headphone audio I have my doubts. With Apple using their lightning cable and other smartphones using USB C, headphone and earphone manufacturers simply don’t know which way to turn and where to invest their money into.

Then it comes to the earphones and headphone Brands that did bite the bullet and invested in a dedicated USB C cable for their products. These wouldn’t work on every single smartphone’s USB C connection, sometimes it would work on one model but yet not work on the next model. Sometimes the headphone would work but the buttons on the inline remote wouldn’t. This is ultimately very confusing and annoying for the consumer and not what they really want. They literally want to plug and play but it is becoming very apparent that this just isn’t the case.

Maybe it’s simply better just to keep your 3.5mm jack headphones and use a USB C adapter on your phone? Nope, this isn’t going to give you much more pleasure either. It appears that these adapters are even more troublesome. Some have built in electronics in order to use the digital output of the phone and others are trying to use the analogue output from the phone. The analogue output, however isn’t always enabled. If you stick to the adapter included in the box of the phone then you will probably have success but best not borrow one from a friend with a different phone. By using a digital USB C adapter it is possible to send the audio to an external DAC such as a Dragonfly or Chord Electronics Mojo, however for utmost convenience this is not ideal, which is why Chord Electronics introduced the incredible Poly portable streamer.

I have a sneaking suspicion that most of the smartphone manufacturers now want the consumer to purchase a pair of Bluetooth headphones. This in itself is going to bring plenty of problems. I am sure we have all been there where we have grabbed our favourite wireless “cans” for the gym, packed them in the bag and halfway through the session “your battery is running low”. I am forever forgetting to charge my wireless headphones, and now that they last over 30 hours it’s not even like i can get into a routine of charging them every night. We then look at the connection that is used to communicate between your smartphone and the headphones themselves. Bluetooth is pretty poor at audio transmission and does not offer the best quality at all. There are however technologies that are being integrated such as LDAC that work over Bluetooth to drastically improve Bluetooth audio, however both the phone and the headphone have to be LDAC enabled in order to hear it working.

I was always an advocate of using your mobile phone for your music listening requirements due to the interface, convenience and apps available to fulfill most music needs. Since the introduction and adoption of the USB C connection on smartphones, this opinion has waned considerably. However there has never really been an alternative option. If you wanted a dedicated music player you had to spend a lot of money to get an increase in performance over what you would have achieved from your smartphone. Luckily, this year I can finally recommend a solution which won’t break the bank with the ACTIVO CT10. This DOES have a headphone jack, but it ALSO has bluetooth AND AptX HD. What more could you possibly want for connecting your favourite headphones or earphones and start enjoying your music. 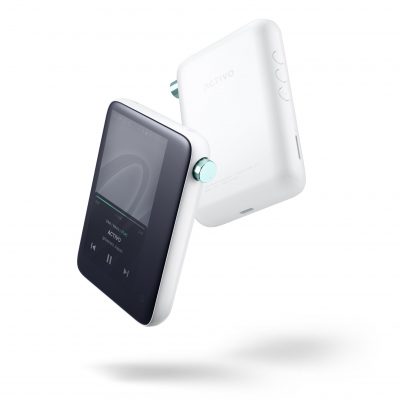 It does appear that the music/headphone and phone industry are on two completely separate paths and neither seem to be meeting in the middle. There are now streaming providers available that offer millions upon millions of songs directly to your phone over your network connection at CD quality. TIDAL can offer higher quality than even CD can provide, however all of that quality would be lost using a wireless headphone and Bluetooth. You can only really hear the advantage of these streaming providers with a decent pair of cabled earphones or headphones. Gone has the time where highly compressed .mp3 music is seen as the best available. More and more providers offer high resolution audio with many more times the detail and resolution of an .mp3 and yet the benefit is kind of being curtailed by the adoption of USB C.. Again this is where the ACTIVO CT10 can provide the solution as it can use the streaming services to deliver the high resolution audio to your headphones. There should be no reason for you to miss out on benefiting from the added improvements available from these CD quality and above music files.

It really could be the end of the USB C connection for audio. Huawei were committed to removing the analogue 3.5mm headphone jack on their range of smartphones including some of the best selling models such as the P20 Pro. Rumour has it however that they are re-introducing the trusty 3.5mm socket with the P30 and this could, I HOPE be the tide change for the dastardly USB C connection and headphone audio.